Rhodes city was founded in 408 BC and since then has become the capital city of Rhodes island. It is situated at the island’s most northerly point. The city was planned by Hippodamus of Miletus, an Ancient Greek architect, mathematician, philosopher and the “father of city planning”. It is thought that the population of Rhodes city in ancient times was around 80,000 inhabitants, whereas nowadays Rhodes city counts some 55,000 permanent residents.

Rhodes can be divided into several parts: the Ancient Town, the Medieval Town, the New (Modern) Town, and numerous neighborhoods like Neohori, the Mount Smith, the Rhodini Park and many more. 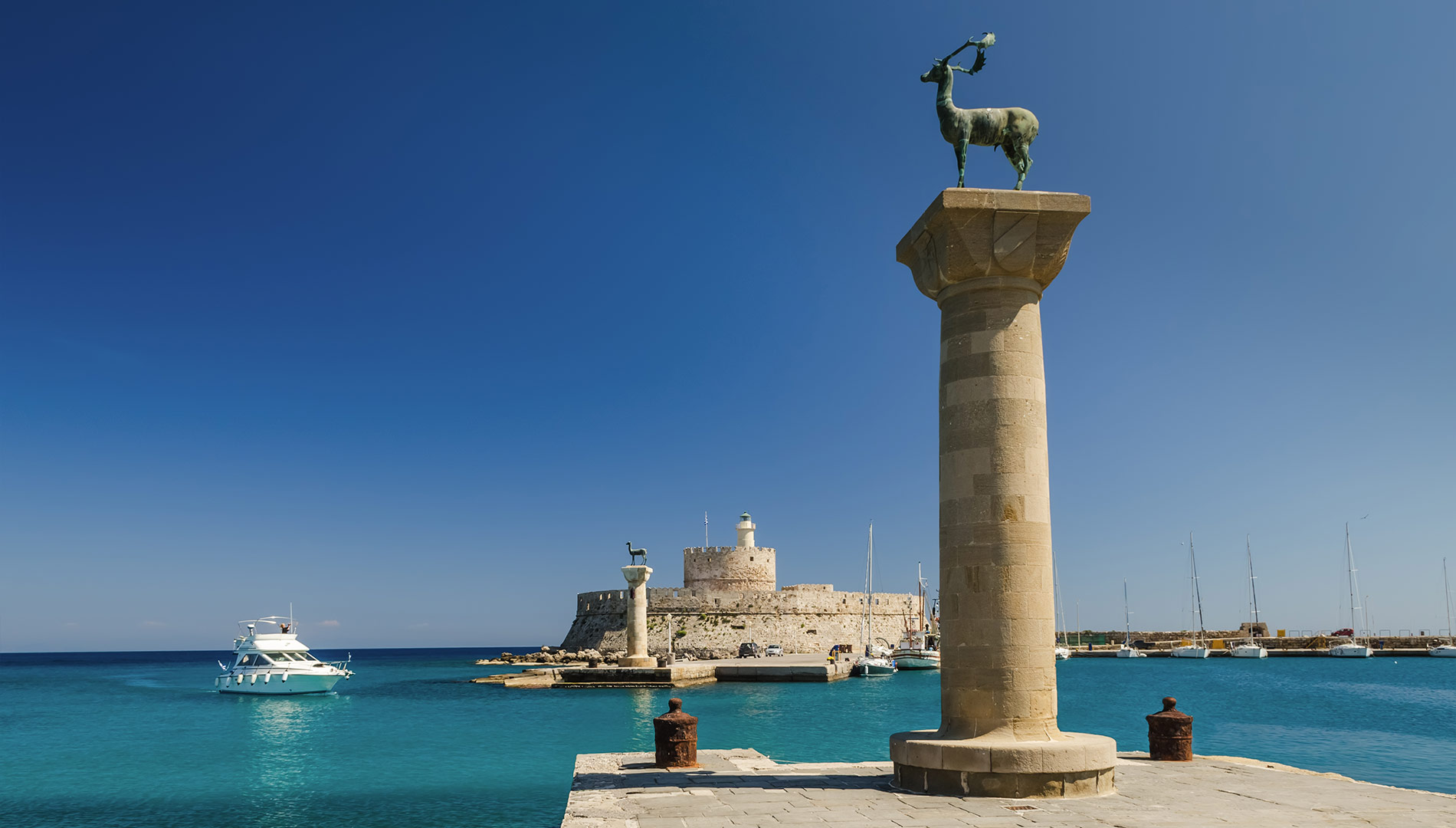 The main part of Ancient Rhodes City is situated at the Eastern side the present-day Mandraki Port. One can see the statues of the stag and the doe at the entrance of the port where once the Colossos of Rhodes was standing. The ancient town was founded as a result of the three largest city-states (Lindos, Ialyssos, and Kameiros) joining to create one powerful and dominant capital state. From the descriptions of ancient writers and the inferences drawn from excavations, one can conclude that Rhodes was one of the loveliest towns in the ancient world. The walls that surrounded the ancient town were approx — 15 km long. Unfortunately, little has been left for visitors to admire because of time, natural disasters, and invasions. 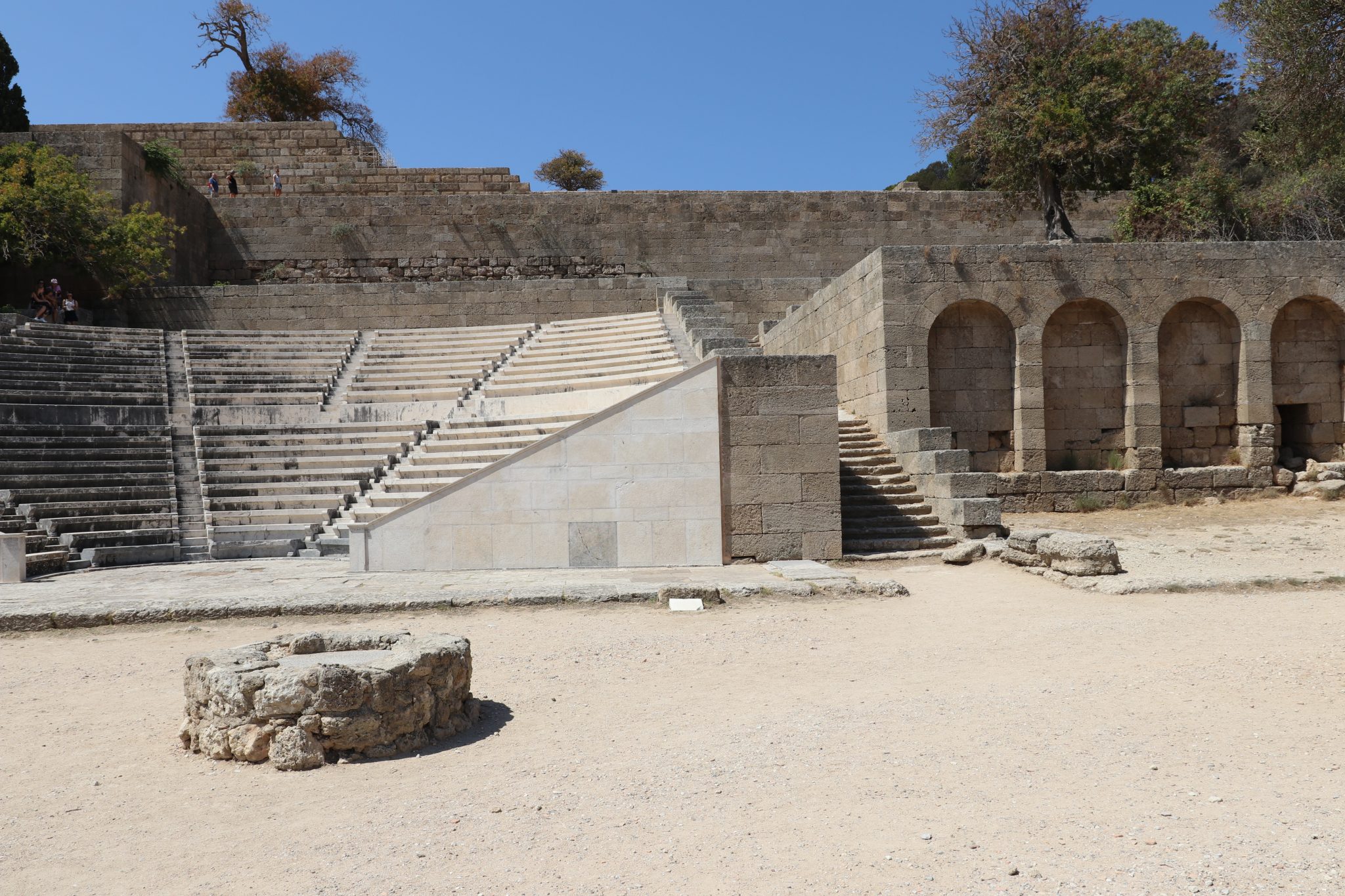 To the south of the city, the walls would go up to the upper Acropolis of Ancient Rhodes, nowadays called Mount Smith. It is less than 3 km from the center of the town. The site has a group of important ancient monuments like the ancient Stadium from 2nd century BC (200 m long and 35 m wide). Next to it is a small theatre (Odeon) that was used for the classes of the famed School of Rhetoric, and a bit further up, one will find the Temple of Pythian Apollo. Only one corner of the temple is reconstructed. A Panoramic drive along the Acropolis of Ancient Rhodes is a real treat due to picturesque views that overlook the Aegean Sea, the coastline of Asia Minor (Turkey), and the whole Rhodes town! 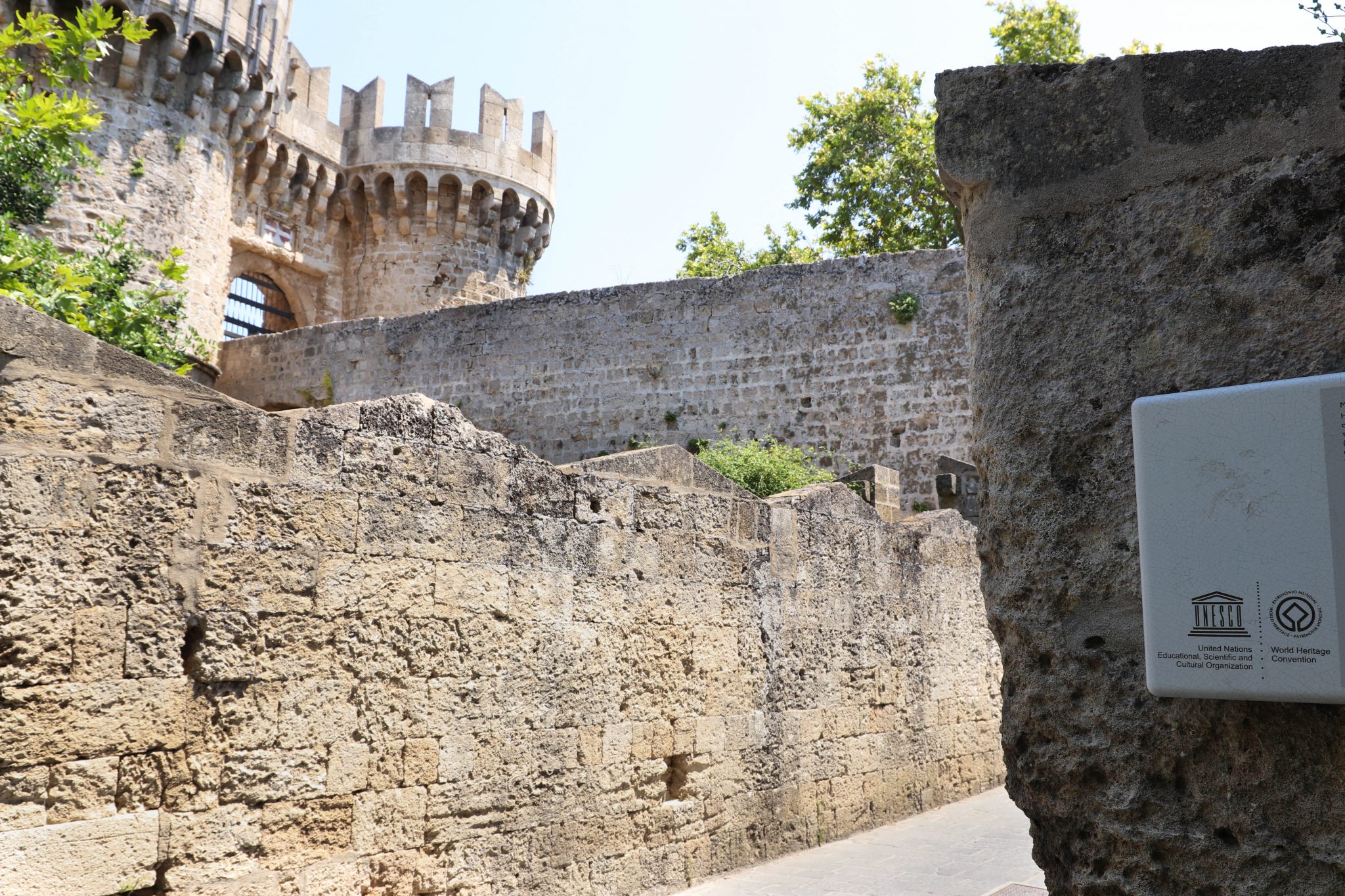 If one has to choose which part of Rhodes must be visited first, it is no doubt the Medieval (Old) Town. The Medieval part of Rhodes is surrounded by a 4 km long wall with nine main gates allowing to enter the protected town and a wide moat from it’s west to the east side. It is not just a monument from the past, it is a vital & lively town with approx. 10,000 permanent residents who live and work in the same buildings where the Knights lived nearly six centuries ago.

The Old town is divided into two parts: the northern called the Collachium and the southern, called Chora or Bourgo. The northern section was dominated by the Palace of the Grand Masters, also contained the official churches of the Order of St. John, as well as Knights’ accommodations. One will find all the most important museums and historical monuments in this part of the city: the Palace of the Grand Masters, The Street of the Knights, the Archaeological Museum, the Church “Panagia tou Kastrou”, the ruins of the Temple of Aphrodite, the Folklore Museums, the Historical and Archaeological Institute.

The Chora (Bourgo) was dominated by local inhabitants and was the center of economic activity as it is still nowadays. The most popular part of the Chora is the Street of Sokratous which ends at the Ippokratous square, near the largest and most popular Gate of the Old Town the Thallasini or Marina Gate. Significant buildings can be admired along the Aristotelous Street, like the Kastellania, nowadays Municipal library, Admiralty (Orthodox Bishop’s residence), and ruins of the Church “Panaghia tou Bourgou”. A must-mention site is the square of the Jewish Martyrs, the center of the old Jewish Quarter, the Dorieos Square with the Retzep Mosque and the Arionos Square with the Mosque of Mustafa Pasha. 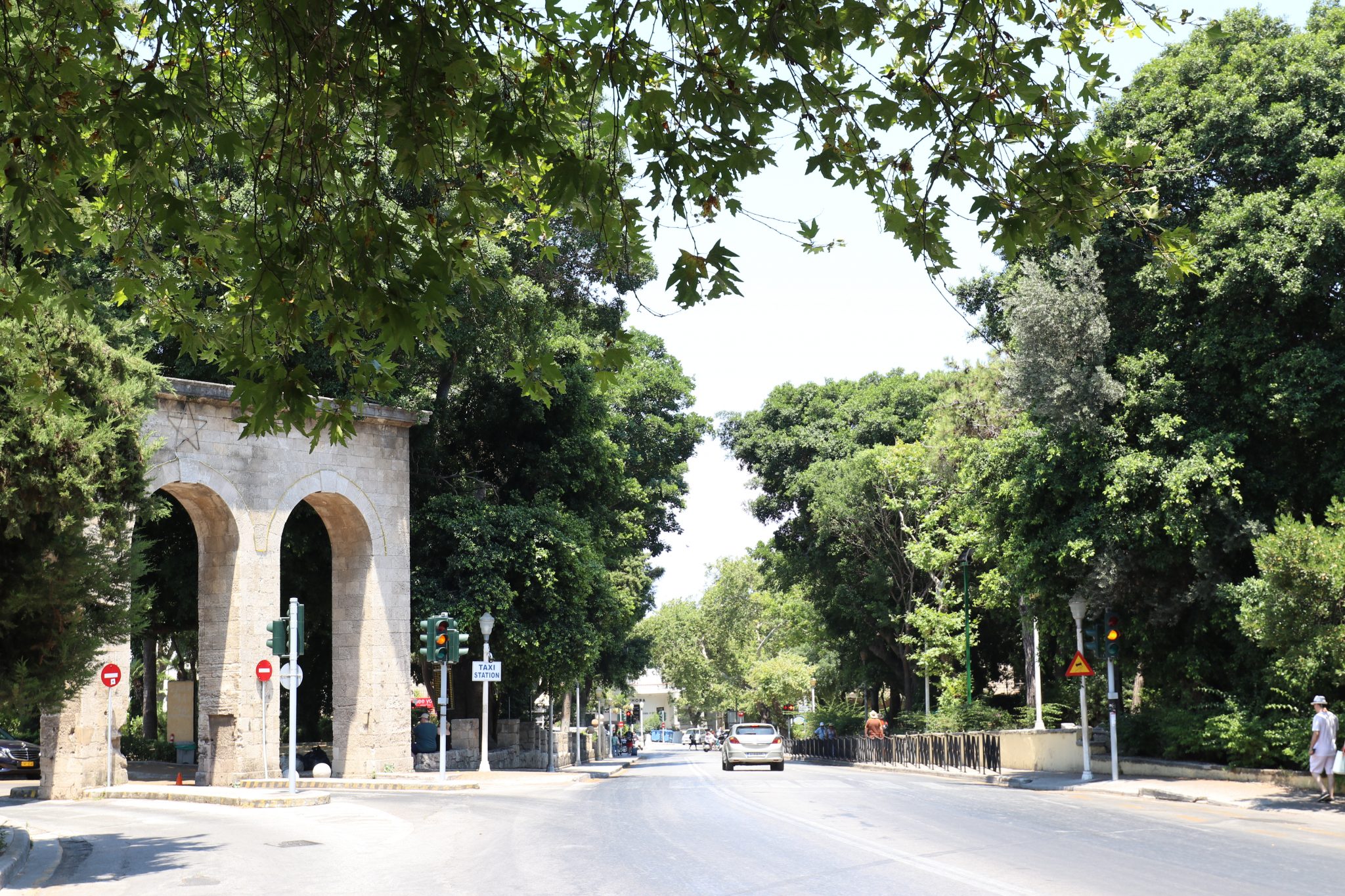 After Rhodes island was occupied by Ottomans in 1522, the Greeks were forced out of the Old town. They were allowed to live outside the walls where different neighborhoods were created. The new communities took their names from its dominant church. During the past hundred years, a new quarter has been created called “Niochori or the “New Town”. It is considered the center of the town. Here is where Italians built their imposing administrative buildings. Among them, is the Governor’s residence, a building with Gothic arches all around, nowadays housing the headquarters of the Prefecture, the Town Hall, the National Theatre, the Law Courts, Maritime Administration, the Metropolitan Church of the Annunciation, the Grand Hotel of the Roses (nowadays housing the Casino), Nea Agora (the New Market). Most of the works created by Florestano di Fausto, the most important architect of fascist Italy. The architecture is a combination of Byzantine, Venetian, Renaissance, Ottoman, and local Greek elements. All the new buildings represented the values of the fascist regime. The modern city followed the Italian model of the garden city, endowed with an ultra-modern infrastructure, including brand new roads, entrances to the Old Town, water and sewer systems, and street lighting.

To feel the rhythm of the town, one can walk through Kyprou Square towards Ammochostou Street where some of the finest boutiques in Rhodes, jewelry stores, fabric shops, nearly all the banks, most stylish cafes, offices, cafeterias, and snack bars are situated. The New Market next to the Mandraki Port used to house town’s green-grocers, butchers, fishmongers, but nowadays most of them have become souvenir shops for tourists.

Enjoy the very best highlights of Lindos & Rhodes on this insightful 6,5 hours private tour where you will visit the unbelievably scenic Lindos village with stops for photos at the famed St. Paul’s Bay and Lindos Panoramic viewpoint. Then discover the outstanding seaside park – Kallithea Springs, a true jewel of Rhodes Riviera. And continue with a picturesque orientation tour of Rhodes City.

Whether you are a full-on nature lover or just someone who enjoys atmosphere-filled walks through verdant landscapes, you will love exploring the famed Butterfly Valley. Then continue your day with breathtaking landscapes of the East Coast and a visit to the timeless Lindos village with plenty of free time.